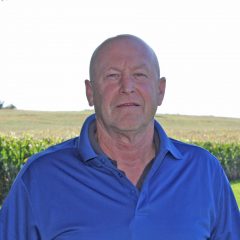 Mitch began his duties as feed mill manager in Leland in April 2004 and became feed department manager in late 2010. “I’ve been around livestock all my life,” he remarked. “And I like working with livestock nutrition.”

With previous experience in feed sales, Mitch took a detour into full-time farming a few years ago. After cutting back his own enterprise, he got back into the workforce. As a feed customer of Farmers Coop, Mitch appreciates the company’s customer-service focus. “Each department cares about the job they do,” he stated. “This is a very conscientious locally-owned Coop. I like working with people – the customers as well as the people I work with.”

Mitch continues to farm and custom feeds nursery pigs. As a sideline, he also raises show pigs. He and his wife have three grown children and one grandson.